It's been a while, but finally an update to Fino.
I decided to try and get things moving by speeding along. I've been on this little project for too long now, and need to stop hesitating. That said, I've still taken a long time to finally put up an update, something I need to work on. 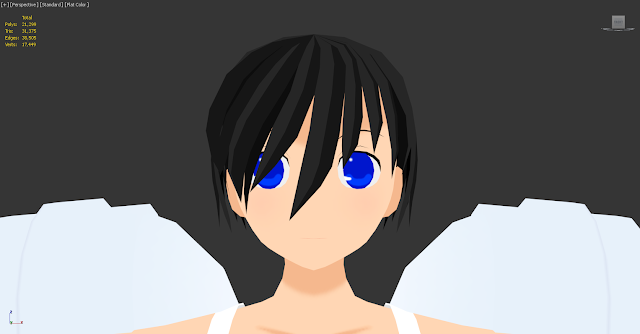 Other than some small tweaks on textures with the arms and shoulder armour, I decided on a basic texture for the eyes and hair. The eyes are a fairly undetailed texture using large blocks of colour for a sort of overall "Faded" look, while the hair I struggled with a lot before deciding on a very basic "Colour for each strand" approach. It's not the best, but I've never been much of a texturer. 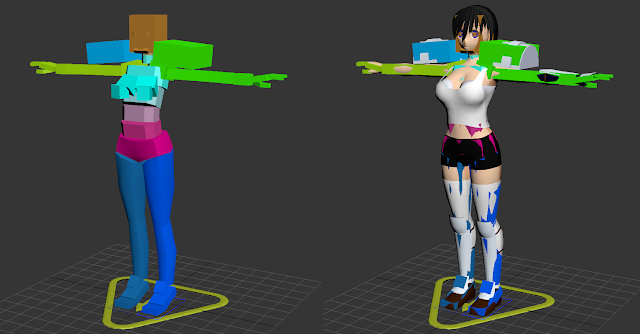 I've finally been able to work on Rigging, the focus of what I've been doing at Keyframe Studios. It's been a while though, with most of the work I did at the end of my time at Keyframe Studios focusing on Animation and some scene composition.

One of the things I've learned to do is form the CAT Rig around the model, most notably the legs and waist, but also the spine fitting to Fino's body. I also added bones for her teeth in case I want to try a different kind of smile, and a small bone for her nose if I need to animate Fino sniffing.

I don't think I'm quite finished with the CAT Rig here yet, I've been unsure about the lower body the most with how the thighs move compared to the waist, though this is always a difficult area to work with. 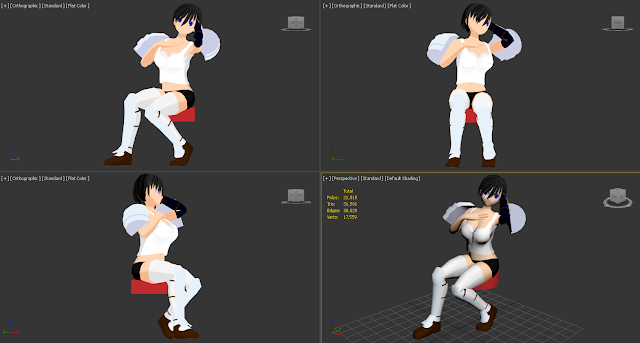 Finally I've got a test of the Rig so far, only using 3DS Max's Voxel Solver. At first glance, Fino looks pretty good here, other than obvious problems like the armour bending. The pose itself isn't too extreme though, and I didn't pose any intricate parts like the fingers or any of the facial features.

I'm still shaky on the upper legs and how they bend around the pelvis though, and how close the shorts come up to the belly. Another part of the model I'm thinking of reconsidering is the shirt or vest, with how the open areas of the shirt move with the body. Not only does the bra I've used still look strange on Fino, I'm thinking how something like her arms would interact with the shirt, or how to animate the shirt moving. This is something I've had to consider before, and I've thought about using something in Unreal Engine 4 to simulate it, but I'm wondering how much simpler it would be to have full control in one Rig rather than use multiple programs. I plan to spend some time looking at this again, but if there are any changes I don't see them affecting the CAT Rig too much.
Posted by Kanjoejji at 6/04/2020