To start, here's an update on Fino: 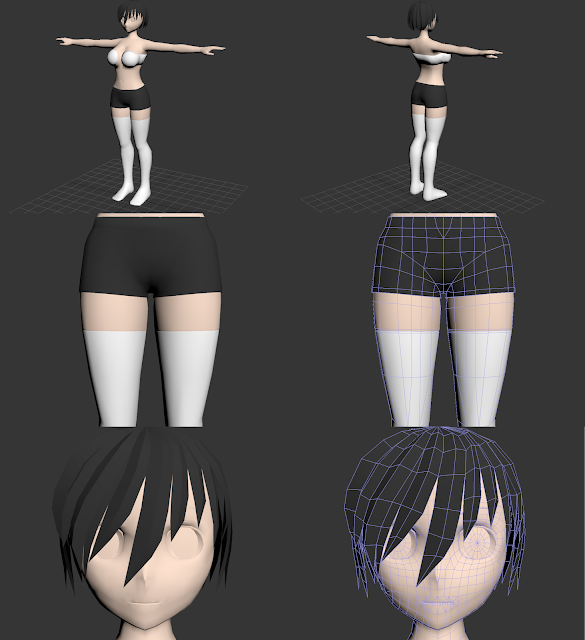 I've also included a close up of Fino's face to show the kind of structure it has for animating, once I get to that point. The main focus has been clothing.
Clothing has been pretty difficult, being something I haven't really modelled before.
After a bit of searching, I tried out a few methods with the Cloth and Garment Maker modifiers. The cloth modifier is pretty good for animating clothes onto existing animations since it can record movements from other forces like the body, and the garment maker is a very different way to make clothes from what I imagined.

Above is a test using a short dress design. You can see the dress isn't tight against the body but still forms around it. This video gives an idea of what I used to make it, and I'm surprised at the "realistic" way of seaming the edges of "fabric" to create a piece of clothing in real time.


If I made clothes with these, I could rig the current body, make clothes around it, then animate the naked body underneath and have the cloth modifier animate the rest. For example:

The two modifiers have been pretty finicky though, and crash very regularly, or cause visual problems in 3DS Max. I'm surprised to see something that so easily breaks 3DS Max be included, though I suppose they aren't the only tools to do this.
They seem pretty interesting for clothing to fit around Fino's body, but making clothes created this way look right or move alongside a body properly has been difficult. The clothes wrap too tightly with the garment maker, and the large number of settings for the cloth modifier makes the clothes too loose, or just fall through Fino.
I've considered using the garment maker alone to create clothes for Fino and manually animating them, but I'm worried how it would affect things like rigging and animation at later stages.
Having the clothing rigged to be the same as the body and to move exactly the same sounds like a possibility, especially with the Skin Wrap modifier, but I still feel like it would be too easy for even one vertex to poke out of the clothing. Discussions online seem to be similar between the two choices, and there isn't a clear cut answer.
In the end, I don't have any plans for this model to be able to change clothes or to have any animated materials, so I've decided to model closer to what I'm used to, a single model made of the body and clothing instead of multiple models for the body and clothes.

Lastly, I've found something extra I think I can use this model for. A costume competition for Sword Art Online.
The contest is to create a costume design that will be voted among others and can possibly end up in the game. There is a template on the site that can be used, but I think having a 3D Model to show a design would be good, and would make it easier to visualise for the game.
I could also submit things like the texture I would be using for the clothing to hopefully boost my chances. Fino's design fits the fantasy theme of SAO Alicization pretty well, and could end up being a kind of debut for her.
I plan to submit the design with the name "Fino" included, but if they don't want a character's name on the design I'd submit it as "Bunker Armour" instead.

Hopefully I can have more of her armour ready for the next update, or might have already submitted it as a design seeing as the contest ends on the 6th September.
Posted by Kanjoejji at 8/30/2019