Another update to Fino, but before that a quick update on the SAO Contest.
In the end, my design wasn't selected for the next stage of the contest. I thought that maybe using 3D Models to help visualise the design would boost me a little, but in the end the overall design really lacked any details, which I left behind to hurry and finish in time for the contest. Maybe if I had more free time to focus on this I would have done more in the texturing phase, but I accept that in the end the design I submitted wasn't good enough.

On to this post's main content, progress on Fino: 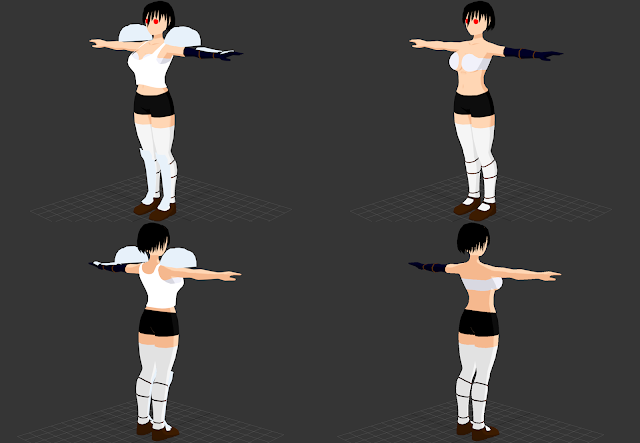 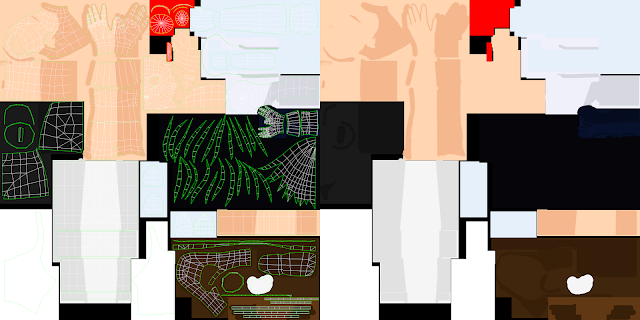 The first image shows the current progress of the model, while the second shows the unwrap and the texture I have made for it so far. I have been using the models, unwraps and textures from the Senran Kagura 3DS game as reference to help me to do this. The head, vest and armour pieces haven't been textured yet, and I want to go back over the arms and bra to add a little more detail in, but progress has been better than I thought it would be.
The first image is using Flat Colours in 3DS Max-all of the shading and shadows are from the texture itself, not from lighting inside of the program. I was a little worried how this approach would appear since light would always appear on the character from one direction, but since it shines on the most important side of the character, the front, it shows the model off very well, even if lighting is actually wrong. This also works well due to the bright colours used in this anime style. The mirrored unwrap for the majority of the body helps to cut down on space, and although it would normally be noticeable when a model has been mirrored, the head and glove help to keep attention away from that.
The unwrap for the arms look strange, different to what I have normally seen, though the unwrap is one of the parts of the model I pay the least attention to so far. The way the arm is cut open with only one seam up to the thumb before wrapping back around works pretty well for texturing, though that may only be for this one-way lighting approach to shadows.
I'm still finding ways that I could have improved the unwrap though, for example the size of some parts like the glove, which means that the texture on the left arm is more pixelated, or the shorts which, due to mostly being a Front/Back unwrap makes the edges very hard to texture without appearing stretched.
I'm surprised to be learning what I am about unwraps from just attempting it, but I'm appreciating unwrapping even more now. I might try to make some changes to the unwrap as I texture, and hopefully will have the textures completed for the next post. This would mean the model would be complete, at least for a base version. I have already seen some things I could change, for example, the addition of ears and teeth which I missed when modelling. I can definitely see why 3D modelling, unwrapping and texturing are done together.
Posted by Kanjoejji at 9/30/2019